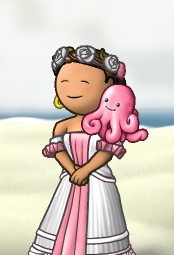 Galene is one of the Ocean Masters hired by Three Rings. She was hired in March 2008 with the eighth wave of Ocean Masters alongside Cronus, Gaea, and Hera. She retired April 1st, 2016.

Galene has a rose octopus named Doris and a rose/white parrot named Nereus. She can usually be found on the fine vessel Tea Ell Sea.

In Greek mythology, Galene is a Nereid, one of the fifty sea-nymph daughters of Nereus and Doris. They often accompany Poseidon and are always friendly and helpful towards sailors fighting perilous storms.