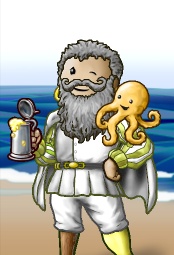 Poseidon is one of the first wave of Ocean Masters hired by Three Rings. His special on-going event project was the Olympic Champions League.

Poseidon got his gig as god of the seas partially by luck of the draw. Zeus chose first, and picked the sky, Poseidon got to choose second, picking the sea, and Hades, always the misfortunate one recieved the underworld. He is married to Amphitrite, but has also been romantically attached to Demeter. Poseidon was worshipped in Athens, where he was second only to Athena in importance, but was naturally best-recieved in the coastal cities that depended on the sea for their bounty.

The mythological Poseidon had the power to create and destroy islands, disrupt the sea, and even cause sudden shipwrecks and drowning on a whim. Luckily, the Ocean Master Poseidon, so far, has proven much more benevolent.