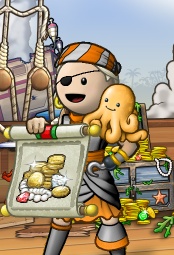 Sprngweather is currently a senior officer of Good Omens on the Midnight Ocean, and captain of Iron Pyrites on the Malachite Ocean.

In July 2006 Sprngweather co-founded Good Omens with four other veteran players: Cire, Devonin, Saltycdawg, and Whiplash, and held the captain's hat for a 2 month rotation.

After the release of Atlantis Sprngweather and Cire were among the first to run regular successful sea monster hunts. They would alternate between one bnavving and the other XOing. Their insight on strategy and ship rules was influential in standardizing how Atlantis trips are run.

In 2008 after the release of the Malachite ocean, she created the crew Iron Pyrites, and recruited many players from Midnight into it. She now owns and manages several stalls there. Her crew was the first crew to join the flag Midnight's Massive Masts after its creation. She has since withdrawn the crew from the flag, feeling that they were no longer a good fit there.