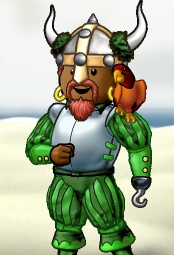 Cronus is one of the Ocean Masters hired by Three Rings and now employed by Grey Havens. He was hired in March 2008 with the eighth wave of Ocean masters alongside Gaea, Galene, and Hera.

In Greek mythology, Cronus was the leader and the youngest of the first generation of Titans. He is credited with ruling over a "Golden Age" in the world, and is therefore worshipped as a God of harvest and depicted with his famous sickle. Cronus was part of a cycle of son's that overthrew their father's. The tale told is that the earth deity Gaea was angry at her husband and son Ouranos (The Sky, called Uranus in Roman mythology) for imprisoning their sons, the monstrous hundred-handed ones (Hecatoncheires) and the one-eyed Cyclopes in Tartarus. So Gaea was able to persuade her son to wait in ambush and castrate Ouranos. However, Cronus was to earn the enmity of his mother Gaea, for again imprisoning his brothers in Tartarus and would later be overthrown by them, and ironically his own son, Zeus.