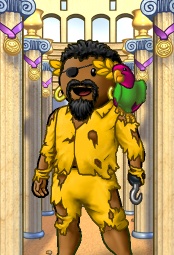 Gunnermooch was originally from the Midnight Ocean, where he had spent most of his playing time moving from flag to flag. His first flag was Anubis' Army under the rule of Anubis. Milana brought him and his (then flagless) crew Sea Gunners to the flag after meeting at the Winter Solstice docks.

Crews and flags changed rapidly, including brief stays in Raptus Regaliter, Notorious Fandango, Crimson Tide, Dark Judgement, Shattered Faith and Don't Panic where he can still be found. After two years on Midnight, Gunnermooch decided to go out and explore the other oceans. Cobalt was the start of something new and exciting. As a founding member of the flag A Song For The Deaf he had new goals and a different style of play to explore.

Then came Sage, where he made the war flag "Meanwhile Rome Burns". After the first war and none of his other declarations returned, he turned his eye to blockade naving. After meeting the governor of Spaniel Island, Helystra, and naving for her flag Hell's Wrath it was clear to see his aggressive naving and her aggressive admiraling would work well side by side. He quickly became her blockade board admiral for all the blockades she ran on Sage.

News soon came that Hunter, a new doubloon ocean would be opening soon. Gunnermooch arrived on Hunter the day it was opened and has never looked back. Hunter brought new challenges and friends as this was the first ocean Gunner had played on from the opening day. Since moving to Hunter, Gunnermooch met his in-game and real life partner Athens.

A collection of avatars commissioned by YPP players

Gunnermooch has navigated in the following blockades: