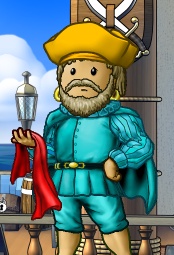 Castor assists upon the high seas with Ocean Mastering and on land with various secret Ringer projects.

Castor enjoys throwing swordfighting tournaments in remembrance of his gladiatorial days. His familiar is actually his twin brother, Pollux, or Polydueces, who was cursed by Circe as they passed her isle on their way to the Midnight and Cobalt oceans.

Castor was one of the Dioscuri "The sons of Zeus". Although the two twins Castor and Pollux share the same mother, Leda, Castor is mortal due to his father being Tyndareus. He was a famed horseman until his death, whereupon his immortal brother pleaded with Zeus to also grant him immortality.