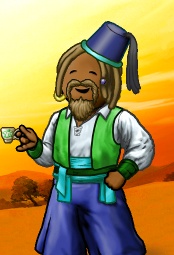 Glaucus moderates the Piratical Parley and Politics sections of the forum. Glaucus is also noted on the Cobalt Ocean as the one who added a tournament board to the back room of the Dragon's Nest inn, Dragon's Nest being a Ringer island. With the lack of ability to modify the inn, it was impossible for the citizens to play their puzzles conveniently.

Glaucus was a sea-god, the son of Anthedon and Alcyone or else Poseidon and Nais. In Greek mythology, Glaucus was the son of Sisyphus and Merope. He owned a team of mares which he kept high spirited by depriving them of the company of stallions. When he lost the chariot-race at Pelias' funeral games the mares became so angry that they killed and ate Glaucus, whose ghost subsequently haunted the stadium of the Isthmian Games near Corinth scaring horses. In Greek mythology Glaucus was the son of Minos. As a child he fell into a jar of honey and drowned, only to be brought back to life by the seer Polyidus using a herb. In Greek mythology Glaucus was son of Hippolochus, a Lycian and together with Sarpedon, the commander of the Lycian forces allied with Priam in the Trojan War. He was killed by Aias while they were fighting over the corpse of Achilles.