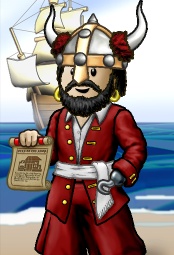 Burninator is currently Captain of The Mad Tea Party and prince of Good Grief on the Sage Ocean.

Burninator started playing in March 2006, but did not really get into the game until June 2006, when he happened to go on a pillage with Blackvixey, a former senior officer of Greed's Ambassadors, who invited him to the crew of Greed's Ambassadors. He quickly became addicted to the game over the summer, and was noticed by Emep, another senior officer who kept an eye on him and promoted him through the ranks. Burninator quickly attained the rank of senior officer in the crew.

Burninator could often be found memorizing the ocean when his crew members logged on, He memorized over 80% of the ocean while in Greed's Ambassadors, but stopped short of finishing.

Burninator became an avid pillager, leading his crew on pillages in either a sloop or a war brig. With the release of the baghlah, however, Burninator found his new favorite semi-large ship to pillage on. Burninator now only pillages on his sloop, the Lazy Guppy, or his baghlah, the Nit-Picky Plaice.

While in Notorious, Burninator became the flag forum administrator for a while, and became very prominent in the flag, spending time with both a title, and as a royal in the flag. He stepped down from these positions in October of 2007 due to real life issues.

Towards the beginning of the summer of 2007, Burninator and several other Greed's Ambassadors succeeded from their home crew, largely due to a disagreement with Grumbler, the crew's captain, and his moving to Verus Fidelitas. So Burninator and his friends formed a new crew named Shanghaied.

In late 2007, Burninator and his friend Lupeloca spent several weeks hopping between various crews on Sage. Mystc was put in charge of his crew while he left for a while. When Lupeloca had to go back to her original crew for some issues, Burninator reclaimed his captaincy for a short while. But when Lupeloca decided that she wanted to create her own crew, Burninator decided that he was bored in his current place, and wanted to get out and experience things from another angle. Riggie was put in charge of Shanghaied again, and Burninator joined Lupeloca's new crew, The Mad Tea Party. This crew soon joined Good Grief, where Burninator was given a title.

Though he is currently not a member of Notorious on this character, Burninator maintains strong ties to the flag.

Burninator has been heavily involved in politics since early 2007. He was involved in Notorious flag decisions, as well as the JoKE alliance ring. He also reads the Sage Parley forums intensively.

He took a step back from politics with his crew's initial entrance into Good Grief, which was in an alliance web that was historically a major opponent of his previous flag/alliance. But this did not last long as he became heavily involved with Good Grief.