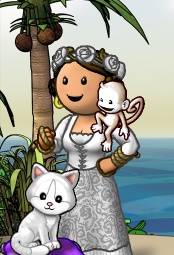 Clotho is one of the Ocean Masters hired by Three Rings and now employed by Grey Havens. She was hired in June 2009 with the ninth wave of Ocean Masters alongside Atropos.

Clotho is one of the two Spanish Ocean Masters hired, prior to the opening of the first Spanish Ocean, Jade. She is governor of the following Ringer-controlled islands: Isla Descartes, Isla Lincoln.

In Greek mythology, Clotho is one of the three sisters of Fate, along with Atropos and Lachesis. She is primarily responsible for spinning the thread of life. The progenitors of the Moirae is often contended, with Zeus and Themis being one choice, and also the primordial beings such as Nyx (the embodiment of Night) and also Chaos.