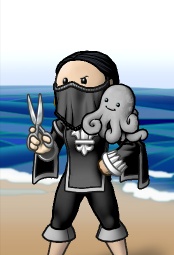 Atropos is one of the Ocean Masters hired by Three Rings and now employed by Grey Havens. She was hired in June 2009 with the ninth wave of Ocean Masters alongside Clotho.

Atropos is one of the two Spanish Ocean Masters hired prior to the opening of the first Spanish Ocean, Jade. In her YPP persona, she enjoys having a drink and bashing monsters, or just pretending to be a ninja.

In Greek mythology, Atropos is one of the three sisters of Fate, alongside Clotho. Also known as "inexorable" or "inevitable", literally "unturning", Atropos was the cutter of the thread of life. She chose the manner and timing of each person's death. When she cut the thread with "her abhorred shears", someone on Earth died.