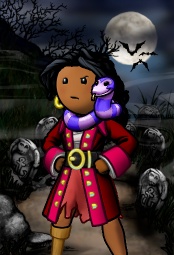 Cambiata is a pirate on the Meridian Ocean. She retired from piratey life in early 2011 but has been known to pop up from time to time to pillage the seas.

Cambiata stumbled onto the Viridian Ocean sometime in October 2006. The first crew she joined was called Beaner Nation. She helped this crew (by providing most of the funds) to create the flag Loyal Assasins where she was made a lady. She eventually rose to be a senior officer in this crew but due to many of the other members leaving she felt it was time for a change.

Early January 2007, Cambiata helped Dest create the crew ItalianPK. This crew soon created its on flag as well, the EuropeanPK, of which she was a princess. When the captain, Dest, went dormant for a period of time Cambiata took over as temporary captain. An unfortunate misunderstanding led to the end of ItalianPK and the creation of Dest's Revenge of which Cambiata was a senior officer. When Dest again went dormant, this time for good, Cambiata resumed the job of captain.

After renaming the crew Midnight Skies, Cambiata decided that she needed a change so, giving the crew to Blako, Cambiata remained as a senior officer in that crew for about a month. When she was ready she created her own crew Aqua Vitae in July 2007 with a new first mate Mistakemker. Her and her new crew joined the flag, Dark Sky, which she had helped create while she was still in the crew Midnight Skies. After a number of key members from the flag left Cambiata felt it would be best to find a new flag. After trying out United We Stand for a few months, she and her crew decided to join the flag Sea Change.

In spring 2009 Cambiata was given the title of Princess in Sea Change. Eventually she was named Queen but with many friends leaving the game and real life getting in the way she decided to step down and retire from the game.