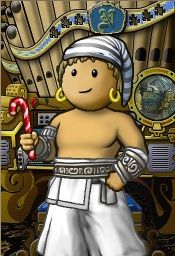 Endymion is an Ocean Master. Before becoming an OM, he served as a contact with Gamigo, the company that maintained the Indigo Ocean. He has now moved to being an OM on the Opal Ocean, being able to speak fluent German.

Little else is currently known about him.

Although there were several Endymion's, the most well known Endymion is the lover of Selene whom he had 50 daughters with, the Menae. It is said that Selene was so struck by the beauty of the mortal that she entreated her father, Zeus to grant him eternal youth. So Zeus blessed the mortal Endymion and also put him to sleep. Each night Selene visits the sleeping Endymion to admire his beauty. It should be noted that this myth is similar in a few ways to that of Orion.