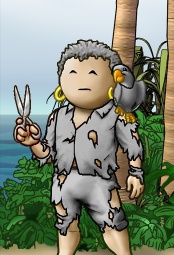 Lelantos is one of the second wave of Ocean Masters hired by Three Rings. He governs Greenwich Island in the Emerald Ocean. He likes grey and hiding. Lelantos is now retired since 14 December 2012.

Lelantos is one of the younger titans of air and the hunter's skill of stalking prey. His name means "to escape notice," "move unseen" or "go unobserved." He is often seen as the counterpart of Leto, as his daughter Aura "Breeze" is a virgin huntress, like Artemis.

Lelantos has not awarded any dolls.