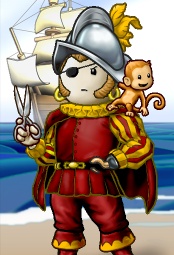 Prometheus is one of the second wave of Ocean Masters hired by Three Rings. He can be found with his orange pet monkey, Monkey.

He also sometimes produces artwork for Three Rings such as the Clear Skies portrait background.

Prometheus was a titan and the son of Iapetus and Themis, and is the brother of Atlas, Epimetheus and Menoetius. He is known for having stole fire from Hephaestus' forge [or generally just Olympus] and giving it to mortal man. However he was also the one who created man from clay. He is often credited with being the champion of human-kind. One instance of this is when Zeus demanded that men sacrifice part of their meal to the Gods. To help mankind Prometheus decided to trick the Gods into picking the worst part of the meal. He placed two sacrificial offerings before the Olympian: a selection of beef hidden inside an ox's stomach [nourishment hidden inside a displeasing exterior], and the bull's bones wrapped completely in "glistening fat" [something inedible hidden inside a pleasing exterior]. Zeus chose the latter, setting a precedent for future sacrifices; henceforth, humans would keep the meat for themselves and burn the bones wrapped in fat as an offering to the gods. As punishment for his crimes Prometheus was chained to a rock and had his liver pecked out by an eagle, but every night his liver grows back, only to be eaten the next day. He is eventually freed, ironically by the demi-god and son of Zeus, mighty Herakles.

In Greek mythology, Prometheus (Ancient Greek: Προμηθεύς, "forethought")[1] is a Titan known for his wily intelligence, who stole fire from Zeus and gave it to mortals for their use. His myth has been treated by a number of ancient sources, in which Prometheus is credited with (or blamed for) playing a pivotal role in the early history of humankind.