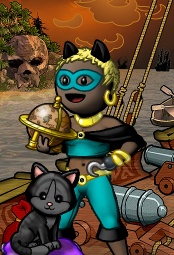 Xeni joined the Viridian Ocean on the 18th of March, 2008. She is currently captain and flirt of The Nesoi and queen of Chimeara. She is governor of Polaris Point.

She plays the pirate Xeni on Midnight, Cobalt, Crimson and Ice as well. Anyone else named Xeni on any other ocean is not her. Her other pirates are Rastar, Jelvik, Orlik, Desiderata, Zeni, Vannessam and Zina.

Xeni is currently away from the game, as she is traveling around the world. She will be back one day, though! In the mean time, she has 2 account sitters.

Also, Xeni started a blog at freewebs back in 2008. But since she's stopped playing the game, it hasn't gotten any updates.

Xeni started out this ocean already knowing a lot about the pirate life. She'd already been playing other oceans since the first Beta release. That is why she joined Sea Dogs of Destruction, as they were the number 2 crew of the whole ocean. There she made fast friends in all ranks, so fast, in fact, that they made her officer after one day of puzzling hard (to meet the requirements), and fleet officer the next day. She was given a sloop and told that if she kept up her amazing attitude that she'd go even further in the ranks.

After the break of Sea Dogs of Destruction, she also followed her friends to a new crew: Revelations. She retained her fleet officer rank upon joining. After creating her website to help new officers (which she has now branched out to include explanations of many diverse areas of the game) she was promoted to senior officer (28 days after joining the ocean). After creating the crew/flag's forum and website she was promoted to lady in the flag.

On May 7th, 2008 Xeni was in-game married to Glycon at Bluedaemon's Estate on Fintan Island.

Due to personal disputes, she left Revelations to join her new in-game husband, Glycon, in his crew, Defenders of the Faith. After he went inactive, she rejoined her friends from Sea Dogs of Destruction and Revelations in a brand new crew, Guardians of Friendship. She joined her hearties in Armada of Apocalypse to take a break from the political drama that surrounded the other crews.

Halloween 2008 found Xeni changing her skintone, to black, and hair color, to blonde. Xeni also took a portrait with every single outfit, complete with halloween mask, that she owned. These can be found on her website.

After being forced out of her home by Dagnanlian in winter 2008 / 2009, Xeni left Armada of Apocalypse with Hahonine and joined Mutiny. In summer 2009, Xeni left Mutiny and joined -Cocytus-, then Outtamyway and then Booty Bashers to help her friends to run SMHs. The goal this whole time was to earn Legendary in Battle Navigation and join Nightmare as a fleet officer. Xeni left Booty Bashers and joined Nightmare on August 10th. On August 15th she achieved legendary in bnav and was made fleet officer.

In the middle of February 2010, her friend, Technitium, decided to reclaim his gifts and break off his friendship with Xeni. Thus she lost her favorite renamed sloop, a Christmas pressent, called Angel of Frost, and her beloved candy striped tiger, Confectioner.

These days Xeni spends her times on the gambling tables, funding her ever growing collection of female outfits and elite pillaging. Take a look at her outfit gallery on quidproclothes.

Xeni won her first Three Rings Rumble Tournament, on Valentines Day, 2009, in which she won Love Ewe, her white white sheep. That same day she won a daisy from the hands of Apollo in a Ringer carpentry competition.

Xeni has earned 6 Ultimate trophies and is currently working on another 5 more. Most of the time her stats rest around Legendary, although she wishes they were all ultimate. If you wish to see her stats on the ult list, click here

Xeni had her big cat, Shere Khan, and her gold cat, Bast, on the Dragon's Nest dock for a few weeks in spring 2009. This prompted much speculation across the ocean and a huge discussion on /greeter chat. To dispell the rumors, no, this wasn't an action on the part of an Ocean Master, it was a mainly a lag bug.

On June 15, 2010, Xeni created her own crew, The Nesoi. The reasons for this were many, but the main one was that she wanted to prove something to herself. 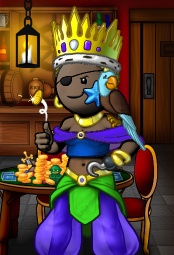 On June 18, 2010, Xeni was made governor of Polaris Point by her friend, Joshuawhelan.

Xeni had her hand cut off early on in her life due to a fatal run in with a wild sea creature while sinking in a blockade. She now wears a hook proudly.

A few months later (Summer 2008) Xeni's friend Bakfrombefor convinced her to join his sinking flotilla attack voyage. There they ultimately sunk and she had her eye gouged out and now wears an eyepatch to cover the gaping hole.

On the 19th of November, 2009 Xeni was trying to raise her stats on an SMH from Guardianz. They sunk after not even 5 minutes inside and while wanting to know what colors her new fish had, Xeni realized she got a brand-spanking-new starfish glued to her cheek. She is so happy now.

Xeni spends a lot of time hosting a Puzzle Pirates help / fan page. You can find tips and tricks to puzzles as well as a full length history of the pirate Xeni.

Xeni has also made a lot of videos explaining how certain puzzles work. Seach YouTube for Xeni Tutorial and you'll find some on many puzzles!

Also important is Xeni's gallery on Quid Pro Clothes. It is very extensive, and she has owned most of the outfits on there.

Xeni has owned a tailoring stall on Labyrinth Moors. She moved it after a few months to Dragon's Nest in hopes of more customers.

She became owner of Gale Force Winds, a shipyard on Havoc Island on August 27, 2009 in hopes of turning a profit for Vanguard. She lost it after the island was blockaded.

Xeni became the owner of Bouncy Castle, a fort and Bouncy Brews a distillery both on Polaris Point on November 19, 2010 when she became governor of Polaris Point.