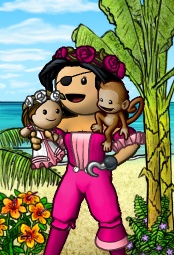 Jippy is a pirate on the Meridian Ocean (although has been known to pop up on all different oceans, except Sage where here name was already taken) and is currently captain of the crew Yes and lady of the flag Corruption.

Jippy started playing Puzzle Pirates in Sept of 2008, initally under a different name, then adopting the name of 'Jippy' on the 13th of the month, where she began her 'piratey' ways in the crew Death Request, founded by Holograph.

Whilst here she learned the basics of how to puzzle, plunder and generally play the game, quicky determining which puzzles worked best with her. (carpentry)

She was promoted first to officer, then later to fleet officer of the crew not too long after this, where she learned how to BNAV and take on a leadership role.

Sometime after this Gummybears and Lillia decided to form their own private crew consisting mainly of a close knit band of hearties and friends including Arghhpirate, Shiftyeyess and Worldpianist; of which Jippy joined, being promoted to senior officer at first then, later sharing the role of captain and welcoming Drewy (her brajah) and Level to the crew.

The role of captain was then shared around between the SO's which allowed a shared and equal environment for the crew to evolve around.

Whilst Jippy does not often participate in pillages she can be seen around Atlantis trips and CI's, however she is first and formost an avid carouser and resides mostly at either poker, treasure drop, hearts or her most favourite, spades.