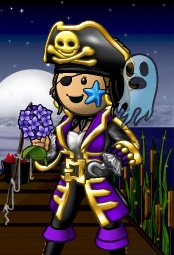 Initially Rhodanite washed ashore on Xi Island in the Jet Archipelago. She later moved to the Emerald Archipelago to make her home on Epsilon. On November 21, 2007 Rhodanite created the Atlantic Seawolves crew and has enjoyed her role as captain. On November 22, 2007, the Atlantic Seawolves were ready to join a flag. Rhodanite joined the flag Spirit of the Game, where she held a titled member position and was briefly a royal in the flag. After much thought and feelings of chaos, she created the flag Bedlam on March 31, 2008 and has resided there ever since. Under the flag Bedlam she has spearheaded a few blockades for Orca Island and has retained governorship of that Island from April 18 2010-December 2011 and March 17, 2012 through July 22, 2012.