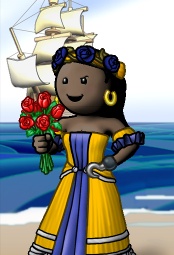 Eurydice is one of the second wave of Ocean Masters hired by Three Rings.

Eurydice is fond of hiding behind the stairs in crowded inns, experimenting with the different settings for drinking tournaments, and playing with furniture. She is most often seen with her dark brown monkey, Cacao, but occasionally can be spotted with her maroon and green parrot, Crismas.

In Greek legend, Eurydice was the dryad wife of Orpheus, who tried to bring her back from the the land of the dead with his enchanting music.