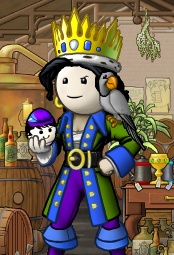 Hera is one of the Ocean Masters employed by Grey Havens. She was hired in March 2008 with the eighth wave of Ocean Masters alongside Cronus, Gaea, and Galene.

Hera can be usually found on her vessel, the Watching You, but can also be found on board the first ship she owned, the Sacred Peacock. Her favourite activities, when not on duty, are sailing, docktarting and annoying Cronus. Hera regularly blogs and also can be found on Facebook and Twitter. Hera has a Grey/White parrot named Zeus and a Red/Black parrot named Kia Kaha ('Be Strong' in Maori) which she got to show her support of the people of Christchurch, New Zealand after the fatal 6.3 earthquake of 22 February 2011.

She is named for the Greek goddess of marriage. In Greek mythology, she was the wife and older sister of Zeus. Her parents were Cronus and Rhea. She is known to be extremely vengeful and jealous. The tales of her retribution are usually connected with her husband Zeus, who is an infamous womanizer, taking on different forms to fornicate with beautiful women.

One example would be the story of Io. For consorting with her husband, Hera had a gadfly sting Io (who was now in the form of a heifer) which followed her wherever she went never leaving her in peace. Io was previously guarded by the monstrous Argus Panoptes, an "all-seeing" giant with 100 eyes. However this is the least of examples of Hera's retribution. We can only hope the person behind the character of our Hera is much more benevolent.