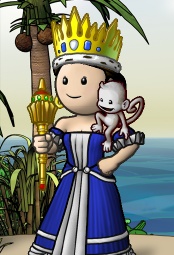 Crystalclaws started playing YoHoHo! Puzzle Pirates in July 2003, on Azure Ocean. She originally landed up on Tinga Island, but soon afterwards moved to Winter Solstice, which seemed to have an appropriate wet and miserable feel to it. Her first crew was Spaztic of Spaz's Army, but on September 7 2003, she left to form new crew British Sea Power. British Sea Power carried on through the move to Midnight, this time joining the new flag Looterati, where they have enjoyed (and lived up to) their reputation as the drunken eccentrics of Looterati. Crystalclaws was Prime Minister (monarch) of Looterati between January and July 2005.

Crystalclaws runs a weekly event called the Ornament Tournament. This involves a swordfighting and a drinking tournament, and the top-placed Loot in each tournament wins a hideous hat (known as the "haaat") to wear for the week as a trophy. This tournament has been running since May 2004, and must be one of the oldest continuously running events in the game. The Ornament Tournament is held at noon game time in The Lord Nelson Arm on Jorvik Island. Everyone is very welcome to join, but only Looterati members get to win the haaats. Other Crystalclaws[TM] events include the Battle of Trafalgar event blockade, and the All-Nightly Whiteley.

Crystalclaws won a grey monkey in the Write the Oceanmasters contest of June, 2005 on Midnight. The monkey's name is Scribble. She previously won a white octopus in the inaugural Team Drinking OCL with team Briterati (along with Oneiropoios, Shuranthae and Solanna). Named Trochaic Octapeder, this octopus was cruelly snatched back when the awards were due for the next season. Crystalclaws was also part of the British Sea Power team that won a parrot (Curação) in LeJerque's Piratical Literary Puzzles II.

Crystalclaws plays primarily on Midnight, but has pirates on the other oceans as well.