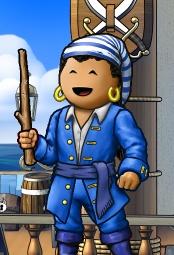 The self-proclaimed God of Keeping It Real, Hermes mastered the oceans with aplomb and derring-do from his hiring in September 2003 until his retirement. His main duties included fielding game-related petitions, dealing with any and all forms of shenanigans, rabble-rousing, monkeyshines, skylarking and tomfoolery, and wearing fancy hats. In his spare time, Hermes could occasionally be found roaming the oceans' docks in search of his marbles, as well as trying unsuccessfully to win at Hearts.

Hermes was also responsible for playing Admiral Dowd, the quirky yet lovable Discount Navy commander in charge of organizing Vilya's island defense during the early days of Midnight.

Hermes was one of five OMs who work what is unofficially known as the Night Watch, or the shift between midnight and 4AM PST. Whether this had a negative effect on his sanity was never determined, though the argument could be made that no one willing to work a graveyard shift could possibly be sane in the first place.

Hermes was generally a messenger for the gods of Mount Olympus, speeding around on his winged sandals, swifter than the very wind itself. In addition to this duty, he also guided souls to and through the Underworld. As an Olympian, he was the patron of boundaries and travellers; shepherds and cowherds; thieves and vagabonds; orators and wit; literature and poets; athletics; weights and measures; invention; general commerce; and the cunning of misfits and liars.

As the "God of Mischief", Hermes was active as a scoundrel from birth, transgressing against his half-brother Apollo by rustling his immortal cattle. Although Hermes' mother Maia said that he had been with her all night Zeus intervened and demanded that Hermes return the sacred cattle. However as they were arguing Hermes started to play the lyre. After hearing his enchanting music Apollo decided that if Hermes would give him the lyre, he would let him keep his cattle. And so a deal was struck.

Hermes was not, in fact, Hermes' first choice for Ocean Master handle; indeed, he originally had several piratey names in mind, but instead chose Hermes on the fly when informed of the Greek God naming scheme.

Hermes wore a costume identical to his in-game attire to the Pirate Parrrty in July 2004. Thankfully, no permanent injuries were caused by his disturbingly bright socks. He also wore a blue swash jacket identical to his in-game attire to the 2005 Key West Parrrty. Whether he intends to continue this streak at future PAarrties is still up in the air, but sources close to Hermes have been heard to comment on what may involve a creative usage of topiary.