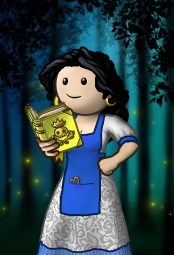 Imp started her pirate life on the Malachite Ocean in the crew Debauchery at Sea. She mostly enjoys a quiet existence, but has on occasion succumbed to royal positions with the flags Hooked and Out of Order. She governed Fugu Island briefly under the reign of Hooked, completing the development of the medium island. During her tenure, she built and upgraded the bank, Figured You Out, upgraded the palace, and built and upgraded the Commodities market, Dangerous and Sweet. When Malachite and Viridian oceans merged on January 31st 2012, Imp joined her friend Adrielle in the crew Hug the Hippy on the new Meridian Ocean. In 2013, she created a Doctor Who themed crew with family members, leaving Hug the Hippy in the care of an alt in order to protect a retired Adrielle's ships.

Imp is particularly fascinated by creative standard ship renames. She has three custom renamed sloops: Heart of Gold, Mad God and Fairytale Ending. Heart of Gold is fitted out as its space ship namesake, complete with white Frankie and Benjy rats. Mad God was a contest prize for Karaoke Kapers Parte the Thyrde. Fairytale Ending was renamed for the fairytale events she has run, also to have themed portraits taken during the fairytale theme portrait background month. Her clever standard renames are listed below, and more are occasionally added. Some of these ships have been given away as gifts.