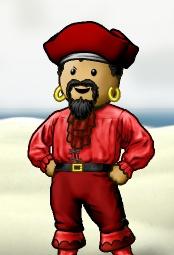 Jevil was the captain and taskmaster of the crew Crimson Hats, and a lord of the flag Royal Army on the Sage Ocean.

Since then, he had been royalty, first as a prince of the flag Trianga , then as a king of his own flag , Red Crown .

At it's prime, Red Crown had 5 or 6 crews among its ranks, but was ultimateley undone by his arch-nemesis at the time Douinette . Shortly later, the Crimson hats were disbanded, only to be reformed again, and after a prolonged period of idleness, the Crimson Hats had been disbanded a second, and, what some yppedia scholars were led to believe, a final time.

Presently, Jevil is enjoying semi-retirement from YPP as a fleet officer and swordsman for the Midnite Devils , a popular crew on the Sage Ocean .