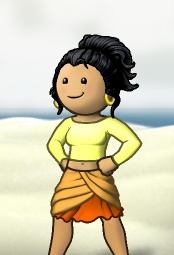 Calliope is one of the Ocean Masters hired by Three Rings. She was hired in February 2015 after many years working on other Three Rings games.

Calliope can be usually found on her vessel, the Amuses. Her favorite activities, when not on duty, are writing stories or singing sea shanties (a little-known favorite among the Muses).

Calliope is one of the Greek muses, presiding over epic poetry and eloquence. She is often pictured with a scroll or writing tablet. She is sometimes referred to as the Chief of all Muses, although this is disputed (especially by the other Muses). She was well regarded for her beautiful singing voice, defeating the daughters of Pierus in a singing match and then punishing them for their presumption by turning them into magpies.