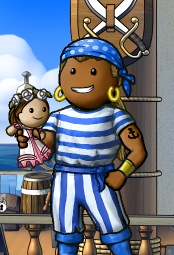 Bladehunter was a Senior officer and swordsman in the crew Knight Stalkers and a member in the flag Shadow Knights. He is a commander in the Lima Island Navy in the Jade Archipelago and sails the Viridian Ocean. Now he is a Senior officer in the crew Eternal Death Wish, captained by Vortar, also a former member of Knight Stalkers and in the flag Dark Shadow Knights.

Bladehunter joined the Viridian Ocean on February the 12th in 2008 where he first joined up with Great White Dugongs, except it wasn't called that then.

He soon grew tired of the inactivity of his current crew and asked Vortar, a captain and the first person he had ever went on a pillage with, if he could join his crew. Vortar refused saying that he couldn't invite people from the same flag, which is when Bladehunter found out they were in the same flag.

Later Jayass, a fleet officer in Knight Stalkers who was meant to be a senior officer at the time but didn't mind, later became one of Bladehunter's closest friends and invited him into Knight Stalkers. They later pitched in together and bought a rowhouse, of which Jayass is a half owner and roomate. Bignathan also became a roomate at Jayass' approval.

Bladehunter enjoys collecting trophies and pets. He has at least 6 in his row house which Jayass and he purchased together and the number is growing. He got a Galene Doll on 21 August 2008 - making Vortar jealous. She is said to be Vortar's favorite OM.