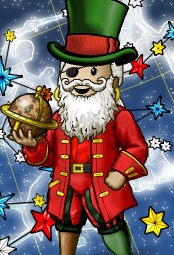 All of Ljamethyst's pirates have been deleted, and any resemblance to currently operated pirates, living, dead, or undead, is purely coincidental.

Ljamethyst is short for Long John Amethyst. He chose this name after a few others were already in use, and after a few moments' thought on what a piratey name might look like. "Long John" is of course a famous fictional dread pirate (surname: Silver) and so he was glad to take this namesake and mix it up a little bit. "Long johns" are also a type of thermal underwear, which gave him a saucy air. His surname, "Amethyst" is of course a precious gem, colored a brilliant violet, as well as deriving from the Greek words for "not intoxicated". LJ's player is known for his teetotaling ways, and in a game where the characters gladly chug Swill, Grog, and Rum all day, this was an important distinction to have.

Ljamethyst washed up on the shores of Caravanserai Island and soon found the crew Harvesters of Sorrow. This eventually resulted in a real-life visit from Arik as well as many happy first experiences which cemented his love of the game. It was here where he learned the ropes of pillaging and crafting, and was promoted to officer where he could flex his piratey muscles a little better.

He left Harvesters seeking greener pastures, and eventually found Fair Winds, embarking on a long career with League of Light, during which he made friends with Everclearboy and Kneiss, especially mega-grand-frig pillages with Evers, and finding his strengths in battle navigation, distilling and shopkeeping. Eventually, this flag awarded him the governorship of Amity Island after League of Light captured it in May 2007 from Passive Aggression at the blockade of Amity IX. LJ ensured that his tenure saw generous profits from the island's assets of fort and iron monger, Great White Sharp. It was during these times when LJ fell in love with Sedna's musical voice and warm, caring heart.

During the year of 2008, LJ and Sedna were engaged to be married in the real life world outside of Puzzle Pirates. While LJ was mentally unable to continue with a romantic relationship, the two worked closely from that point until November 2013, to run their flag Jigsaw Tessellators and their crew Tales from the Deep.

LJ had a close collaboration with members of Perilous Puppets such as Tilinka and Ynahteb. They enjoyed many good times together, pillaging and dueling and blockading and carpenting. They joined forces not only on Sage but on the Ice Ocean as well, where LJ and Tonyanator formed a crew, Privateers of Myra and Stella Maris their flag, and helped the developers test new fixes and features in the server software. LJ was primarily interested in the software, while some other Ice players were more interested in the small playerbase making it easy to blockade and run shoppes and do other things that were considered un-fun in the production oceans.

For personal reasons, on June 24, 2011 he left his beloved flag Jigsaw Tessellators behind, deciding to join forces with his hearty, Miget. On July 14, 2011, he said farewell to Miget and rejoined Jigsaw Tessellators, resuming his rank as senior officer in Tales from the Deep.

During the ocean merge process in January 2012, Ljamethyst was instrumental in testing the newly-merged Emerald Ocean, and for his trouble he arranged for many portraits to be taken. The developers had promised to wipe the merged ocean and reset it before allowing it to open for production, so its beta test status gave LJ lots of money and stuff to play with and do whatever he wanted. So he abused the privilege and used all his money to take portraits with friends, which can be viewed below. Normally, he considered portraits mostly a frivolous waste of money (they are very expensive, comparatively) and so he did not often sit for one.

At the end of November 2013, convinced that Jigsaw Tessellators was no longer the place for him after months and years of decay, Ljamethyst marked the end of an era by saying goodbye forever and joining the crew Dynamite Residue in the flag Rebound. Aided by his good and faithful hearty, Kait, he looked forward to a career of renewed zeal for the game in the years to come.

On August 19, 2015, Ljamethyst announced his retirement from Puzzle Pirates. Several months in the making, he had virtually quit the game in February, and after some soul-searching, realized he had truly moved on. He greatly misses many of his hearties, crewbies, and flaggies, but of course, many of them had moved on long before LJ did.