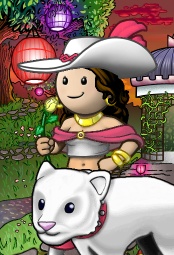 Melany on the Hunter Ocean is a senior officer of the crew Quiet Time, and queen of the flag Exposed and an Admiral in the Aimuari Island Navy in the Orion Archipelago.

Melany started playing Puzzle Pirates in late December 08 because she found that her RL BFF Nephylim was addicted and wanted to spend more time with her any way she knew how. She joined Pirates Of Dark Water on Hunter were Nephylim was an officer and helped build the crew up. She climbed the rank ladder very quickly. However it was not enough for her. She talked Nephylim into navving Cursed Isles runs and pillages and got bored with the lack of activities the crew provided.

PODW was brought an offer to merge with Spartan Pirates and Melany was all for it. She convinced her crew that this was a step in the right direction and the same day she became a Spartan. She started as a fleet officer and again climbed the ladder quickly becoming a senior officer and a princess. She worked with the Flag and organized Sparta's first ever blockade.

Melany decided to move on and founded the crew Shakedown in the year 2009 on November 10.

Melany enjoys every aspect of the game. Loves all puzzles (except sailing) and managing her shops. You can most likely find her running marathon Cursed Isles runs.