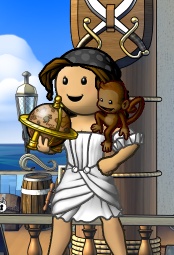 Fannon is captain of White Wynds and a princess of Crimson Tide on Cerulean. She is also a senior officer of On the Rocks on Emerald.

Fannon first set foot on the Midnight Ocean when the Pollywog dropped her off upon the docks of Alpha Island in August 2004. After jobbing on multiple pillages, she met a pirate named Thallia whom she instantly bonded with. She made her home in the Moogles of Mischief, Thallia's crew, and as she demonstrated a natural skill at most duty puzzles, she was soon promoted to the position of Officer and eventually became a Senior Officer to reflect her natural leadership within the crew.

Fannon's early days were spent with the Moogles and Trans-Atlantic Empire, but also in learning the merchant business. During this period, she began to manage a distillery stall and a tailor shoppe, Teddy Bauer, the first steps in her path of extensive shoppe-keeping experience. At a later date, she purchased the tailor from Blueminky along with another shoppe, a weavery called Thread Bear, both on Cranberry Island. During this time she discovered that she had a penchant for swordfighting, gunning, and battle navigating.

In January 2005, Fannon joined The Cartographers of Silver Dawn, seeking new experiences and challenges. She maintained close links with her original crew, a fact that became more evident later in her Y!PP career. Fannon quickly rose within the crew and was promoted to Senior Officer, taking an active role within both flag and crew. She served as a diplomat in Silver Dawn from March to May 2005, playing a key role in the negotiations and communication during the Scallywag War. A career of navigating in blockades began during the conflict, where she navved alongside the likes of Kuibbles and Shuranthae against Scallywag Syndicate. She also began gunning at a high level, frequently ranking among the top ten of the ocean.

In May, Fannon left The Cartographers and Silver Dawn as she looked for a new dimension to her play style. She soon joined White Wynds, the crew of her longtime friend, Shuranthae. Upon joining White Wynds, Fannon began to run high-end brig pillages and refined her PvP skills. Her blockade navigating experience also became more extensive as she commanded Crimson Tide ships in neutral blockades. In September 2005, Fannon emerged as the victor in the first ever Familiar gunning contest; Banana Bonanza on Midnight. She took the grand prize of a brown monkey which she named Fudge, and from whom she has never been separated.

After her original Midnight crew migrated to Cobalt and reformed as Moogles of Mayhem under the flag of Hydrophobia, Fannon continued her long-standing friendship with the crew by making them her home on Cobalt. As on Midnight, she eventually became a Senior Officer and established herself as a prominent blockade navigator, navigating in various battles including Cochineal I and later Ansel I.

In December, Fannon took on the role of Plaguedemon, one of Avernus' helpers in the overseeing of Sakejima Island. She was involved the most during That Sinking Feeling in yer Stomach as a navigator for the demons. She was also a judge in multiple contests to award shoppes on the island. With Hemme and several other Moogles, Fannon also competed in the event blockade at Sakejima in January of 2006 in which her team won a black/maroon parrot familiar named Nevermore.[1] Fannon completed memorizing the Midnight Ocean in February and navigated in the large scale blockade of Jorvik XII in March.

Also in the month of March, she was named a Lady of her flag, Hydrophobia. The next month, April 2006, the Moogles moved out of their Hydrophobia home and into Ascension; however, Olive Island remained under the control of Moogle alts, and Fannon's alt, Shiny, became temporary Queen of Hydrophobia, and Fannon was appointed as Governor of Olive.

In May, the Moogles returned to their home in Hydrophobia, where Fannon reclaimed her status as a titled member, a status she also briefly held in Ascension. On Midnight, she became captain of White Wynds and was appointed to Crimson Tide's flag council. On Sage, she began running a weekly pillage for her crew, On the Rocks, and assisted the crew's former flag, Go With The Flow, in its defense of Admiral Island. When the crew founded its own flag, Armed Cocktail Party, she was honored by her crewmates with a titled status.

Fannon was appointed monarch of Crimson Tide in June of 2007, as Misery stepped down from the position.