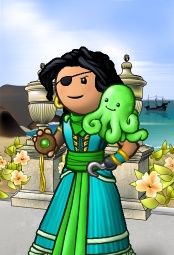 Mogget is a pirate on the Midnight Ocean and has been playing since October 2005. She started her pirate career with the crew Kiss Me Mate, under the flag Silver Dawn. After flag drama led to Thuvasa and his crew Death or Glory leaving Silver Dawn, she moved with the crew to the flag Midnight Marauders where she served as princess of the flag. She was soon promoted to senior officer. In early March, 2007, Mogget decided she was ready to start her own crew, and created Vitamin Sea with the help and support of three trusted mates - Zigystardust, Lilbubba and Shakki. The four person crew raised fame within days and joined the flag Blighted, attracted by the fun, laidback attitude, lack of drama and high levels of ingame activity that Blighted offered. While with Blighted, she served as member of the 'Sekrit' council that governed it, and later, as monarch. However, changes in RL involved Mogget spending less time ingame, and she stepped down from the position. Vitamin Sea remained with Blighted till it was disbanded in March 2008. Mogget's crew is currently flagless.

Mogget would love to blockade-nav for YOU! Enquire via PM on the main forums.