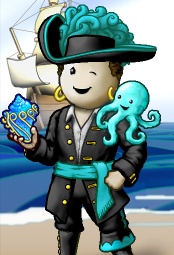 Piplicus started off as a greenie in early May 2004, where he switched between numerous crews, including Black Sails and Imperio, before settling down in the currently flagless Dawn Traders crew. There, he subscribed, and quickly rose to the rank of senior officer. However, after an incident with a particularly obstinate greenie who then went on to complain to the captain of the time, Kaaky, he was thrown out of the crew. Kaaky believed that Dawn Traders was a crew who was respectful to all, and maintained that respect was paramount. However, this comment would haunt her in the future.

Crewless, he then set up the crew Reality Bites, and then recruited the avatar artist Thyla into the crew. With just two sloops and a cutter, they started the flag Expetamus Praeda (latin for we expect loot).

After recruiting no other crews, they ditched the flag, and were welcomed with open arms into Midnight Horizon, which housed Dawn Traders. All was well for quite some time, as the flag rose to 15th in Diamondblade's list of flag 'fame' (fame, as we know and love - or hate - wasn't around then). The flag focused on getting an island - Zeta or Eclipse. However, this started turmoil, as there were (rightful) allegations of secret meetings. Piplicus does not deny being in a few, but maintains that they weren't all that important. The conflict came to a head one evening, when, along with allegations that Kaaky told a prominent member of the flag to "scupper off", many crews abandoned the flag, dissatisfied.

Midnight Horizon never recovered, and was soundly defeated by of doom in the first Zeta blockade, a month or two later.

The splinter crews banded together to form Neptune's Mariners. The flag never got off the ground, and drifted into inactivity. Piplicus bailed, as it was most of the people he had known for quite some time now who were logging off for good.

Probably the closest to quitting he'd ever been - and still, quite far off quitting at this point - he put a message on the forums, asking for a crew who would take him on. Since he was becoming a forum regular, amassing about 800 posts by then, he got a few invites. He was torn between joining Falcon's Fury, under the eye of Faile or Mercenary Squadron, under the watchful eye of Robertdonald. The choice was very difficult - he earned 17,000 PoE in one day with Robertdonald, but never saw him again that week, whereas Falcon's Fury was more welcoming. He pressed on with the last couple of remaining crews, Heksubah's Witches Brew and Scarab's Fun House.

On the 19th of December, Piplicus won the twelve days of Christmas drinking tournament, and hence earned a green and red parrot for his efforts, which he subsequently named Bratticus.

After a three week hiatus from the game over the Christmas holidays, spending the festive season in Canada, he returned to find a forum explosion - the advent of a certain flag called Notorious Fandango. Intrigued, he abandoned Fun House prematurely, and joined. At the time, Robertdonald and Falcon's Fury were in the flag; he no longer had to choose between them. He signed up, and found that it was what he had been looking for all along. Staying through the flag, even through its overwhelming defeat at Nu Island, he rose through the ranks to senior officer (which is not easy to obtain in the crew), and started the navigate in blockades for the flag, mainly on brigs.

Meanwhile, his interest in quizzes and events in-game was piqued. He ran a Y!PP version of Jeopardy! in May 2005. Despite being overwhelmed with text, he enjoyed the experience thoroughly.