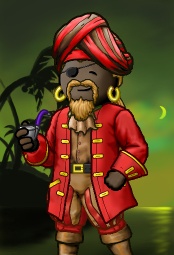 Orsino is a fleet officer of the crew The British Eagles on his home ocean of Viridian. On Ice he is a senior officer of the flag The Hospital and on Midnight he captains the solo crew Hong Kong Cavaliers.

As an island designer Orsino has made or contributed to the following islands:

Other contributions and awards

Orsino joined the game in March of 2004 and quickly became part of the crew Vermillion Volitans. After the captain left the game suddenly he found himself shuffled into the newly created Midnight Trading Company, part of the flag of doom. Rising to Senior Officer over the course of the summer, Orsino played a small role in of doom's efforts to colonize Zeta.

After the flag of doom entered retirement Orsino began a solo career as an iron merchant, running a sloopfull of iron each day from Islay of Luthien to Turtle Island. Under the guise of an alt he also began exploring the newly opened Viridian Ocean. He eventually joined the Black Plague as a fleet officer under this assumed name. Meanwhile, Orsino floated from crew to crew under his main identity, staying for a short while as a cabin person in Psychopaths of the Seas. Eventually, he semi-retired his alternate persona and he now plays as Orsino almost exclusively.

For a five month stretch, Orsino played extensively on the Ice Ocean, gathering funds for an art project he called "The Doctor" The portrait results of this art experiment can be seen in this gallery.

Orsino is a semi-retired pirate, going through long stretches of inactivity from the game proper. He is, however, still active in the community as a YPPedia administrator, an island designer, and with the Grand Crafting Puzzle Project.

On May 29th 2007 Orsino lost his eye in a flotilla protecting Dendrite Island from Azarbad the Great.