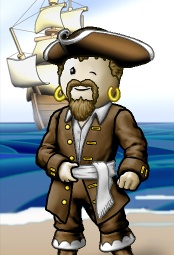 Quiglin sails the seas of Midnight and Sage.

In addition, Quiglin is a Shanty Jockey for Shanty Raid-io on the Midnight ocean.

He has several different shows:

In addition he also serves as a senior officer of Cupcake Inquisition. He spent a few months in Fandango Familiars prior to his current crew. During that time, he and Parthanos were often seen talking about a campaign for governor of Cnossos. Quiglin expanded this to any island that he might have a chance of being a governor at, although nothing ever came of any of it. However, after a long while, he ended up winning the governorship of Cnossos through a contest that was held there.

On the Sage Ocean, he spent a brief time in Shanty Asylum along with several of the other Shanty jockies who had just forayed into that ocean, mostly just to claim their names. After a few months, he left to take a more active role in opposing the Go with the Flow alliance ring that had managed to take over most of the ocean. There, he can currently be found as a senior officer of Pernix Adaeque Simius.

Quiglin has admiraled in blockades past, and is always looking for an opportunity to step up and help another blockade by masterminding a smart group of individuals looking to succeed. Here is a list of blockades Quiglin has participated in as Admiral: