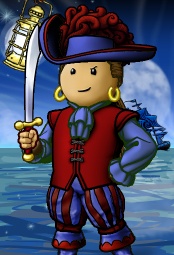 Featherfin, or Fin, Finn, and Finny as he is known to various friends, is a cheerful pirate of Jorvik Island. Fin considers himself to be something of a one trick pony when it comes to puzzles, specifically Sailing. He can generally be found on Cerulean, although has been known to spend time on various other oceans for exploration purposes, or for blockades.

Cast onto the shores of Alpha Island in early January 2004, Featherfin's earliest greenie days were spend under the name of Twinfang with the crew Proletariat Primates. His days were simple, spent mainly on the now non-existent training ships, and exploring islands by means of the navy. As these were the days before unlimited trial accounts, Featherfin came back as Razer of Winter Solstice once his initial 10 logins had expired. He sailed with the crew Velvet Claws of Crimson Tide. Finally, in March 2004, the character Featherfin proper was born, and duly subscribed. Spending much of his time travelling into the Emerald Archipelago by way of the Cnossos - Guava navy, Fin wandered, crewless for a time. Eventually he settled upon Turtle Island as a home, as his search for the Proletariat Primates became fruitless, and the lack of whisk potions in those days meant relocating to an island in Emerald would be daunting to a greenie. It was upon the docks of Turtle that Fin was recruited by Ghostman, captain of Vendetta of the flag Nyx's Scions. In those days his long term goal was to save up for a swashbuckler's jacket that he had seen upon the rack of one of Rifkind's tailors on Turtle, 12,000 PoE seeming a fortune to the young pirate. Gradually talk began to emerge of a blockade upon Fin's home shores of Turtle, as his flag, Nyx's Scions sought to win it for themselves. Fin bilged throughout several rounds of the 24 hour blockade of Turtle I, generally unaware of the political climate, except that Crimson Tide were the opponents.

Some who wander are lost

In light of Nyx's Scions' defeat at Turtle I, the flag quickly disintegrated in May 2004, Ghostman informing the young pirate that his crew would be all but mechanically disbanding. Fin took to jobbing out with crews from the Turtle noticeboard, planning to join Bilgebecky in her founding of Vendetta's Orphans in the new flag Widows and Orphans. However, instead of this, Featherfin was recruited by an officer of Brotherhood of Steel, of The Union. The wandering pirate sailed with this band for a few months, watching and learning from the officer training of Starless and Zenham. Making a new home for himself of Jorvik, Fin's docktarting brought him into contact with the Looterati and Silver Dawn. Planning at first to seek to join the Looterati, Fin's experiences with Sailintony and Zmasterben of Silver Dawn led to his desire to join either flag. The wandering pirate first met the Ransack Marauders in the Lord Nelson Arm on Jorvik. Stumbling in upon a conversation about lacrosse between Tristanjones and Scaryfairy of RM, Fin chipped in and several hours later found himself participating in a drinking game with several RM officers and the captain. After several pillages with his new hearty, the OiT Caleblue, Fin joined RM a few days before the blockade of Jorvik I. Present for the dropping of the war chest upon Eta by Chihiro, Fin began his new life in the Ruby Archipelago.

September 04 heralded OiT status and training beneath Pjotr's watchful eye. Featherfin's eager attitude and enquiring questions led several of the crew's SOs to wonder if he had an ulterior motive in joining the crew. Happily, this was not the case. Fin was promoted in early October and quickly integrated himself into the social network of the flag.

With the establishment of a Diplomacy Office by Queen Chihiro, led by Zebulan, Featherfin began his tenure are an ambassador for Silver Dawn. Throughout the Scallywag War, Fin, Fannon and Zebulan played key roles in the negotiations between the Ruby Alliance and Scallywag Syndicate, making firm friends with many members of the Looterati and Carpe Noctem. The abate of the war at the end of May led to Zebulan's stepping down as lead diplomat in order to allow someone else the chance. Featherfin was appointed to the position at the beginning of July and subsequently organised the entire office into an efficient information gathering machine. Bringing in new diplomats and establishing the role of Junior Ambassador, Fin broke several dead alliances and, under King Feegle's guidance, helped to forge one with the previously loathed Crimson Tide. In the middle of June, Featherfin was promoted to Senior Officer by his crew, in light of his longstanding commitment to them, and gifted a renamed sloop; the Fantastic Featherfin. October heralded a "Spooky Vignette" writing contest on the main forums, run by Bia. RM's gifted writer, Feegle won the grand prize of a parrot, with Featherfin and Bisquick winning renamed sloops as runner-up prizes, the Spooky Featherfin and Spooky Bis respectively. In mid-December, Fin stepped down from the position of Chief Diplomat, passing the position onto Daedalus. With the introduction of OM dolls, Featherfin was gifted one by Apollo, a day after their implementation, for making him laugh on the docks of Eta one night. He remains convinced that Apollo will come knocking on his door demanding it back any day now. He also received the gift of a renamed sloop called the Festive Featherfin, from Piplicus during the Christmas period. Featherfin played a prominent role in Feegle's acclaimed event; Silver Dusk, and helped to create the events for his crew's 2 year birthday celebrations.

The new year saw Featherfin become titled as a Lord of Silver Dawn in light of his long term contributions to the flag. However, Featherfin and RM became increasingly disillusioned with Silver Dawn, the current structure and mentality of the flag not resembling the flag that the fiercely tight-knight crew had joined. After several attempts by the crew to find a solution, the crew came to realise that there was nothing left for them in SD, striking out on their own once again under an independent flag; Marauders Pact. Additionally, from the beginning of the year, Featherfin took his love of XOing to Cobalt, supporting Fannon as she navigated in various blockades on that ocean. In May 06, Fin won second place in the Fantasy Island contest, earning a place on the island design team for future oceans. These days he can usually be found on the docks of Jorvik or elsewhere, often swordfighting or bothering Silvertooth.

Featherfin is one of the winners of the Fantasy Island Contest. His wonderful design work can be seen at Mirovia Island on the Meridian ocean (as well as on the retired/merged Malachite ocean).