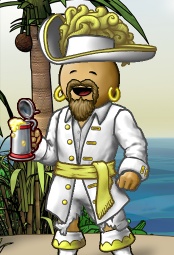 Dorel is a senior officer of The Pittsburgh Pirates on the Cobalt Ocean.

Dorel is a two-time former captain of the Yellow Jackets. The first, more lengthy, stint followed Cedric's captaincy. It was during that run that the Yellow Jackets aided their flag, Midnight Armada, in the successful blockade of Park Island, and merged with another of the Armada's crews, Belles of the Seven Seas. Dorel passed the hat to Jelly, and explored the sea on his own, for a while. His second stint was after his return to the crew, when Jelly decided to step down, and was only provisional.

Dorel also served as captain of Fandango Familiars, following Stevedave in that post. During his time in Fandango, Dorel was one of the pirates sold to Misery, whose time she chose to redeem against their own flag at Xi II.