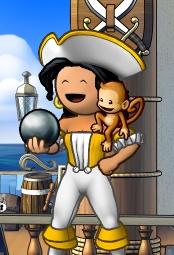 Daggerdarla is most prominently known on the Sage Ocean front, although her Puzzle Pirates career was launched in the Midnight Ocean and the legacy continued on Viridian albeit on short spells. Currently, Admiral Island is home to the pirate; however, Daggerdarla is a native Descartian where her first stall -- a distillery -- was established.

Her first stint on Sage saw her affiliated with the training crew Navver's Ed. Shortly, she made the transition to the crew skeletons in your closet where she rose through the ranks to become one of the senior officers, and at one point in time, captain of the crew.

Currently, Daggerdarla is the captain of the crew Obsidian Daggers, and lady of the flag Candy Coated Chaos. On top of the numerous stalls under her care, she is also owner and proprietor of Lock, Stock and Barrel, a furnisher shoppe located on Admiral Island.

Daggerdarla participated in numerous events and won many prizes.

(For her efforts in the above, Daggerdarla was rewarded with a doll of the respective Ocean Master.)

Daggerdarla turned her Bowditch villa into Haunted House and organized the following events for Halloween 2007: