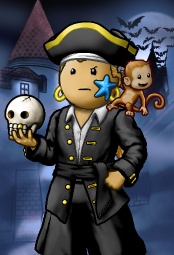 Sharkiez is a Captain of the crew Stars Catcher and the king of the flag Blizzard on the Sage Ocean.

Sharkiez began playing on Sage in December 2005. The first crew he joined was Shark raider but after a while he felt the need to change. Not soon after he joined Irish Rogue where he met a great pirate named Fatmanjoe. They became friends and Fatmanjoe would assists Sharkiez on the game play. Unfortunately one day Sharkiez takes out a ship to pillage and while he was out at sea he was told by the senior officer Lezzy to rechart it and sail it back to the island. He tried to rechart but failed as he was inexperienced and did not know it can only be recharted when the ship is at league point. For that reason he was demoted to pirate rank. Sharkiez was very disappointed in the crew and he left it to join Fallen angel.

He did not have fun during his time at Fallen angels as the Captain was very strict on the use of other’s ship and even one own ship. Sharkiez felt that there was very little freedom.

One day Sharkiez went on pillage with the crew Sim o sud. The pirates owned the crew were Firangi and Urufuyasha. They allowed him to battle navigate the ship. After many sea battles they offered him a chance to become senior officer in their crew. At first he declined.

After a few days of thought, he decided to quit his crew and joined Sim o Sud. He enjoyed the crew and it was fun pillaging with Firangi and Urufuyasha all the time. Months passed by and the launch of Hunter Ocean arrived. Urufuyasha and Firangi decides to move ocean. As Sharkiez was the most loyal senior officer in the crew, the rank of captain and monarch were passed on to him.

After two years of him being the captain, the crew rank dropped to renowned and crew member declined to 60. Finally Sharkiez gave up. He learnt that the crew would only follow the captain just as a dog would follow its master. When the captain left, the crew also left. It was the death of Sim o sud. Sharkiez was weary of his duty of keeping the crew alive.

Amir, one of the last senior officers from the beginning of the crew finally left the crew and made his own crew called “Sim o Sud”. He was a loyal officer who stayed with him the longest. Sharkiez knew that he couldn’t find happiness in owning his captain’s crew so he decided to hand the control of his crew to Amir by merging with him. After the merging, he left the crew.

Sharkiez likes to be a leader, he did not like being ordered around due to his bad experience with the crew Irish Rogue and Fallen angels when he was a beginner. This time he try to find happiness through creating his own crew named “Stars Catchers”. There were many players from the merged Sim o Sud crew join him. He and Delores worked on the new crew “Stars Catchers” together. This time he felt like a real captain. The crew may be small but it was good because he look for quality in players and not quantity. His crew define his identity. Sharkiez enjoy running all kinds of pillage. These include normal pillage, brigand king hunt, flotilla, event blockade and his favourite was sea monster hunt.

These days Sharkiez often stays at home and play parlour games, he occasionally takes a ship out to do pillage.

During his lifetime there have been difficulties and although some goals are hard to achieve, Sharkiez always tries his best. Because it is these challenges that make the game fun to play.