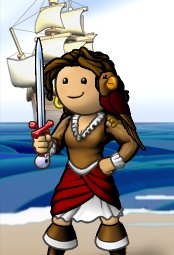 Ravine is a pirate on the Midnight Ocean.

Ravine made an avatar for Apollo and all she got was this lousy trinket.

The pirate Ravine was created in late 2005, after Lizzie retired her original pirate Greasy. Ravine is a senior officer of the infamous and elite crew Black Death. She is currently best known as an event runner, as she co-hosted the 10th Black Death tournament with Zife and then ran the 12th Black Death Tournament on her own. She also ran the creative writing event The Scene Is Set [3] in 2006, which had a pink/black parrot as its first prize.

She took three years sabbatical from the game between 2006 and 2009, but is now back in full force. She is always keen for a Cursed Isles adventure or a visit to Atlantis, or even a couple of hours on a flotilla; but you can usually find her working her Alchemistry ranking up to #1 in the ocean, or running the event 'du jour'.