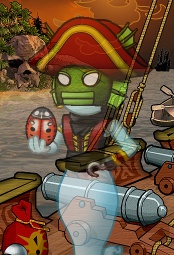 Xeitgeist is a senior officer and monster hunter of the crew Shooting Stars of Sage and a member of the flag Fearless Privateers. This creature can often be found on uninhabitable islands, slapping white elephants, malacats, and other similar abominations with bubblegum-colored fish.

Xeitgeist scuttled her way into the pirate world from an obscure Atlantean outpost on the 10th of February 2007 to carry out the mission of retrieving a highly-prized stash of chocolate chip cookies and apple pies that some blue named pirates stole from their citadel. She began her voyage with a fleet of ships filled with her kin, but since they were continuously besieged by packs of barbarians, she was left with no choice but to order her troops to return home to lessen casualties and finish the mission on her own. Upon reaching the Sage ocean (a place infested by hordes of smelly humans), she began to spend months of her time spying on different crews, flags, and suspicious pirates, relying only on the darkness to conceal her existence. Valuable information became her greatest reward after all her sleuthing: apparently, there was a crew named the Shooting Stars of Sage which was known to have delicious chocolate-chip cookies and apple pie. With this brilliant lead, she decided to take her mission a step further. In the early days of March, Xeitgeist assumed human garb and joined the suspicious crew for the eventual closure of her mission… and apple pie.

After months of spying and undercover work in disguise, she discovered that the information she received regarding the stash of pastries was inaccurate. To her dismay, the cookies were plain sugar, the pie was blueberry and the crew offered smiles, hugs, and officer training; not desserts. While mulling over this major setback in her investigation, some friendly officers of the crew poked her and told her about getting trained into becoming an officer in the crew. She initially scoffed at the preposterous idea of being told to learn the human ways of dealing with a vessel and the life-forms that dwelt upon it, but she decided to take the offer to throw suspicion off her (cookies and slices of pie were disappearing from the crew oven, and flipper-prints were found on the scene). It thus happened that under the watchful eye of her trainers and the captain, she was able to successfully sail a ship back home, and along with her brilliant crew, was able to exact her revenge on the barbarian scum that ruined her mission. Due to the aforementioned event as well as the supportive and friendly atmosphere that the crew had, she decided to abandon her Piscean mission so she could just sit back, relax and enjoy the company of these lovely humans who adopted her into their little world with pokes and sparkly hugs.

Years have passed since the day that she donned the bandana of piracy and realized that she was born for pillaging and not for undercover missions that involved retrieving desserts for greedy Piscean superiors. To this day, she remains in the crew that she initially signed up for, as she has found a family in their midst. Every now and then though, it is said that the echoes of Atlantean symphonies playing inside floating gorgonyx halls beckons her to return to her outpost and restate herself as a citizen of the Piscean court. She has not been seen to comply to their demands and hops on frigates charted to Atlantis instead so she could spar with those she once considered to be her kin.

Xeitgeist's history of obsessive puzzling are said to have come to an end. She currently invests her time and energies on assaulting her crew mates and flag mates with an endless barrage of lolspeak and poespam on crew chat and flag officer chat. She also joins occasional forum artistic events whenever something strikes her fancy or when squishy dolls are at stake.