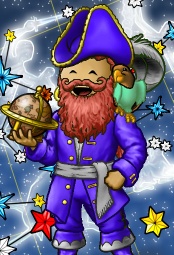 Locu is senior officer in the crew Rated Yarr on Cerulean Ocean. He can sometimes be found chatting to old friends on Opal Ocean. Most of the time he is annoying Vargas on the Cursed Isles, but also likes good old pillaging and Brigand King Hunting.

Locu started his pirate Life during the Beta Testing of Indigo Ocean and stayed there, with a break, until the end on 31/12/2006. He and some friends repaid some Midnight players a visit on Midnight Ocean. After Indigo Ocean was closed down, he took a shore leave to return in November 2010 to Midnight Ocean. There he still was FO in Indigos Revenge and started to relearn the puzzles and memming the ocean. After some time he figured, that a one man crew wasn't to his liking any more and joined Rated Arr during April 2011. There he still is to pillage, hunt Brigand Kings, plunder the Cursed Isles and sometimes hunt Citadels in Atlantis or even more occasionally haunting the Haunted Seas. In 2012 he started to roam the Events!-forums and hosted events himself, starting with Pi-Day 2012 as well as translating events hosted by other players to the Opal forums. In July 2012 he was promoted to Captain of Rated Yarr as well becoming a royal of Booching Blaggards.

Events helped as a judge that were hosted by others