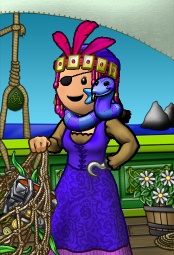 Ellenya is a pirate on the Ice, and Meridian Oceans. She also formerly played on the Crimson and Viridian Oceans.

Ellenya was moved to the Meridian Ocean from the Viridian Ocean following the ocean merge on January 31st, 2012.

Ellenya recently began playing on the Ice Ocean. She enjoys testing out new features of the game, and exploring the islands of Ice. She was also a semi-regular fixture at Nemesis's Poker Parties on the Ice Ocean.

Ellenya played on the Viridian Ocean for around five years, and loved her crew, Hell Avengers. She was known for her love of sailing, and her knack for acquiring trophies and pets, particularly cats roaming her home and deck. Ellenya's first ship was the 'Purple-Grey Pearl', a sloop she swears is mightier than any other ship, though this was proved to be false in an encounter with a war frigate. She maintains she accidentally clicked attack, however this has been widely disputed.

More recently, Ellenya acquired the sloop 'Successful Sprat', which was a sister ship to the Pearl. This ship could often be found roaming around Adder Ridge, until it was unfortunately sunk in a Cursed Isles adventure... Ellenya's advice to other pirates was this: "Send me a tell on Viridian to join my crew, Hell Avengers. Ye wont regret it. Mash Much Rich Ships!!"

Elena is PurpleClown on the forums.

Avatars and art created for Ellenya