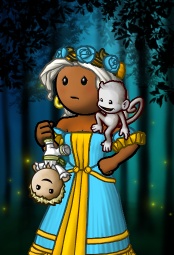 Velternal is a pirate on the Meridian Ocean. She is the captain of the crew Red Velveternal and the queen of the flag Velt's Boiyz.

She is the current governor of Polaris Point, Olive Island, and Jubilee Island.

She is an artist who has submitted more than one winning portrait background in the Portrait Background Contest.

Velternal recently started collecting dolls, and has managed to obtain the following, so far:

Velternal's profile on the Forums.