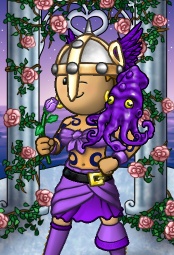 Wayfarer is a senior officer of the crew Thick as Thieves on the Meridian Ocean. She also plays on the Emerald Ocean. When she's not puzzling or standing around the inn, she can often be found drawing avatars and participating in forum events.

Born in Malachite in late July of 2010, Wayfarer soon fell in love with her ocean, her crew, her hearties, and the game as a whole. She soon found particular affinities for Cursed Isles runs, carpentry, and her now-trademark Valkyrie helmets. Venturing into the forums to try a hand at art, Wayfarer soon began drawing avatars for hearties and participating in December Daily Doodles, and other events. Finding courage in successes during such events, she eventually built up the courage to try trinket design and portrait background contests, eventually winning some. In the future, Wayfarer hopes to enter more competitions in the future and improve as an artist, as well as to come up with more clever standard renames for her ships.