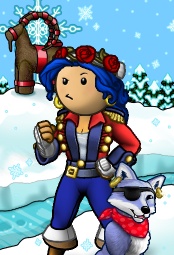 Twilah (aka Bellahdonna) is a pirate on the Meridian Ocean. In game, she is princess of the flag Wireless Technology, captain of the one-man crew On Wings of Dragons, and commander in the Lima Island Navy in the Jade Archipelago. Her favorite puzzles include rigging, bilging, foraging, treasure haul, shipwrightery and blacksmithing. She enjoys going out on all the various sea monster hunts, but will occasionally pillage as well. Though she is not an official greeter, she has no problem taking the time to respond to a Greenie's questions.

Offline, she is an American artist that has been lucky enough to have several pieces of her art selected for in-game use. So far, eight of her limited edition portrait backgrounds and five of her seasonal trinkets have been chosen.

She takes avatar art commissions, the details for which are located on the forums here: [1]

For those curious, you can find a detailed history of Twilah's familiars here.

She received her karkinos, Touche, on April 17, 2014 after a successful Atlantis run by Cruzo of Semper Fidelis. Thief, her fox, was purchased from another player shortly after the release of the Fox boxes in April of 2014. Tobias, her unicorn, came from a Booch box purchase in August of 2014. Tinge, her ghost cat, was payment for an art commission in December of 2014. She found her as-of-yet unnamed patchy blue-grey fox with red handkerchief in a gold box on February 12th, 2015.