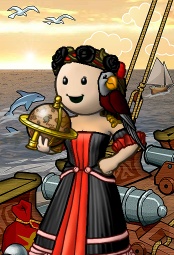 Feylind is a pirate on Midnight Ocean. She is a senior officer of the crew Polaris and an experienced event runner.

Beginning her pirate career in March of 2005, she started out in the crew Crystal Seas, undergoing officer training and advancing to the rank of senior officer. That summer, Crystal Seas joined Moonlighting, and Feylind became very active in that flag, eventually becoming a royal. When Crystal Seas left to create their own flag, Feylind chose to stay with Moonlighting and joined the crew Moonlit Wake. She agreed to take on the position of flag event coordinator for Moonlighting, where she found her niche in the game.

After running several flag level events Feylind made her debut as an oceanwide event runner by acting as cohost in Ptg's Sloop Blackjack event. She followed that with several other flag, ocean and forum events. To this day, event running remains her favorite part of the game.

Eventually, she felt she needed a break from ocean politics, and left Moonlighting as part of the grand finale of her "Who Pignapped Bacon" flag event. She spent several weeks in her event crew, Ragged Destiny, building up fame to create an event flag and searching for an active, apolitical crew to make her new home. After creating the flag Event Horizons, she left it to her alt, Evemarie, and joined the crew British Bandits of the flag Vexillam Odiamus.

She remained a happy member of the British Bandits for several years, until time and real life drew away most of her crewmates and she moved on, looking for a more active crew and flag. Currently she is homed in the crew Polaris in the flag Suntne Vacci Laeti. (She considered it appropriate to move from one British crew in a flag with an unpronounceable Latin name to another.)

Feylind enjoys all the pillaging puzzles (except battle navigation) and is competent but not extraordinary at them. She remains content to be able at all the carousing puzzles. Her other favorite activity is blockades; she frequently loans herself out as a jobbing contact, vice admiral or executive officer. No one is foolish enough to invite her to nav.

Feylind is a dedicated forum lurker, mostly only posting in the event forums. She enjoys participating in forum events and has won various levels of prizes in several. In August 2006 she won a parrot familiar in the Microfiction Deathmatch. The parrot was named Piromancy, or Piro for short, after the neologism she coined for Round 14 of the Deathmatch. About a week later, her frequent event collaborator, Ptg, won a monkey in another writing contest. She finds this amusing and poetic.

Her second familiar, a tan monkey she named Black Sam, came to her in 2009 through the New Years Resolution of Black Sam Rogers contest.