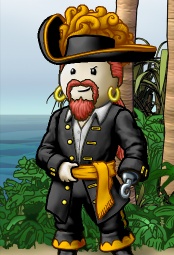 Toemoesh is captain of the crew Toemoesh's Angels on the Emerald Ocean and King of the flag No Expectations. His current role in the flag is jack-of-all-trades, and Monarch.

Toemoesh began his pirate career on the Hunter Ocean in 2006. He first joined the crew That Hemp Company, which was lead by Evilclone. After a few months of great fun with both Evilclone and Purdylady, Evilclone quit playing and decided to merge the crew into Skull Bashers. Not agreeing with this merger, Toemoesh decided to leave the crew and started Planet of the Apes together with Purdylady. This had gone for some months. Being busy in real life made Toemoesh quit the game for a while.

But later he returned. His pirate being deleted he started all over, and finally recreated the good name of Planet of the Apes together with Purdylady, who never had quit playing. However, after having played in his crew for a couple of months, it turned out that Toemoesh preferred a larger crew over a small one. This resulted in Toemoesh's decision to join forces with Serendipity. Ever since the beginning of his pirate career, Toemoesh has always had good contacts with Belle, the captain of Serendipity, which made his decision to join her crew a lot easier. However, after a long time of being in Serendipity, Toemoesh was tired of having to listen to a woman all the time and left to start his own crew once again. This time the crew was named Toemoesh's Angels.

Toemoesh is most known for his puzzling. He is always willing to pillage and when he does, he will do whatever station is needed at the moment. This dedication to all different puzzles resulted in the ultimate pirate trophy.