A ship is a vessel for moving pirates and commodities, pillaging, foraging, and holding other events. The various decks and rooms of a ship have the props to access the ship duty puzzles, configuration, and management.

From the ship's helm (or "navigation wheel") and navigation table, officers may configure voyage, manage jobbers, and view the officer bulletin board. From the hold, officers may manage the ship's inventory, trade commodities, bid at the market, and access vessel records.

Each ship class has a different capacity of total pirates, duty stations, and commodities it can carry. See also the list of commodity storage capacities of ships, for a more detailed breakdown of how many of each commodity will fit into the hold of each ship. 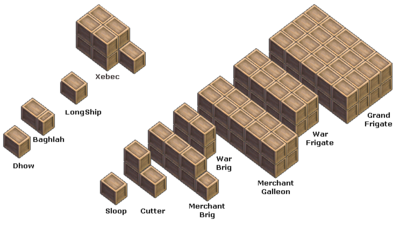 A Comparison of Ship Volumes

All ships move at a slow speed from league point to league point even if nobody works on a station, although damage and bilge will rise in this case (see floating). Assigning swabbies or pirates to some stations improves performance. This will raise the speed or keep damage and bilge low respectively.

With only swabbies working on stations during a swabbie transport the different ships can reach the following performance figures if the specified minimum is assigned to carp and bilge. Players can perform much better though the max and min speed of each vessel is fixed. (Referring to diagonal leagues. Horizontal are 40% longer)

Upon entering a Flotilla, Sea Monster Hunt, or Blockade (non-event), the swabbie count will drop back down to 4 (or 3 on a sloop).

Swabbies will start to leave the ship when additional yellow-named players come aboard when the total number of (yellow-named pirates + swabbies) reaches the "swabbie cut-off" number.

If there are no pirates or swabbies working on sailing or rigging stations, the ships will decelerate with time. If there are enough pirates or swabbies working those sailing stations, the ship will accelerate to full speed. Swabbies will always perform a low fine rating during the voyage, while player ratings will vary depending on their skill. The following numbers assume swabbie performance.

Each ship class can handle a different amount of damage in battle. The amount of damage a ship has taken is indicated on the damage meter. Maxing for swordfight damage (this is a historical name which predates the Rumble puzzle) will cause the occupants to have the maximum amount of black blocks in the Swordfight puzzle or lock out a large portion of the Rumble board during the melee stage of the battle. If the ships are at war, or in a sinking blockade, reaching full damage will cause a ship to sink.

A ship left unmanned in port will reset its damage and bilge to zero after 15-30 minutes. Stepping on board the ship will reset the timer.

When a ship runs into another ship, rocks, or some edges of the board, it also receives damage. The mechanics of ram movement are detailed on the Ramming page, including the amount of damage, included below.

In blockades, each ship class also has a different influence diameter. When choosing which ship to use in a blockade, it is important to know the trade-offs between influence diameter, firepower, damage capacity, and manpower required to run the ship.

* -- Small shot equivalent
^ -- Not including the helm

There are fourteen basic kinds of ships made at shipyards and many limited edition or design-based variations. Each one requires different amounts of various commodities, labor, and doubloons (doubloon oceans only).

* -- These ships require a design that matches the ship name.

Prior to release 2004-04-28, there was no such thing as grappling. The swordfight began when both ships occupied the same square on the battle navigation board. Also, before this, the edges of the board acted like winds that pushed ships back onto the board.