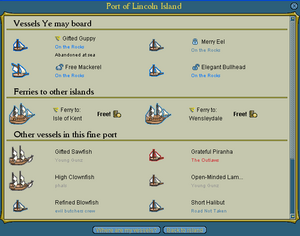 The dock is an interface which allows pirates to see which ships are in port at the island they are on. Additionally, pirates may access ferries from the dock, and can view a list of crew ships, their lock statuses and their ports. The dock can be accessed by clicking the yellow portal arrow which points out to sea. Additionally, clicking on the minimap and selecting "Dock" will transport a pirate to the dock interface. Any of these actions will remove that pirate from the island scene. Clicking on the minimap while using the dock interface will place that pirate in the island scene again, as near as possible to the dock portal arrow.

An island's dock can also refer to the immediate environs surrounding the portal arrow to the dock interface. On some islands, the scenery takes on the appearance of a dock. On others, a rowboat in the water indicates the dock. Additionally, on uninhabited islands, the dock is referred to as "The landing" when it is accessed through the minimap, whereas on populated islands it is referred to as "The dock".

On populated islands, it is common to see pirates standing on the docks engaged in conversation. This pastime has been termed docktarting by the Puzzle Pirates community. It is commonly thought that docktarting is one way to increase a pirate's social puzzle standing.

All ships ported at the current island, which are in a pirate's crew and jobbing crew - if applicable - are shown in the Vessels Ye may board section of the interface.

The Other vessels in this fine port section contains docked ships that have been boarded within the past thirty minutes. (Note: a server reboot wipes clean the list of recently boarded ships.)

Clicking on the button labeled "Where are my vessels?" will obtain a list of every ship belonging to the viewer's crew. Ships belonging to jobbing crews are not shown on this screen. As of release 2015-06-25, the top of this screen displays vessels whose deeds are currently held by the player. The button labelled "Back to island" will return the viewer to the island scene.

The interface also makes use of many icons and outlines to denote the state of ships. These features, and their meanings, are listed here: