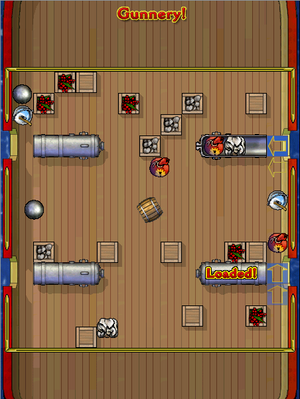 Gunnery is the duty puzzle responsible for loading a ship's guns. When a cannon is loaded in the puzzle, a cannon becomes available to the navigating officer to fire in sea battle. The number of loaded guns is indicated by the cannon counter.

A pirate who has been ordered to gun, or who is playing the puzzle, is known as a gunner.

The goal of the puzzle is to correctly load the four guns as quickly as possible. The gunnery pieces are sent out in all four directions from a wooden barrel, in random order, until there are two of each piece on the board. By default, the barrel is in the middle of the board. However, in a sea battle the barrel will move as the navigator turns the ship. When a piece is used, another of that type will be sent out the barrel. Pieces travel in a straight line until they strike a fixed obstacle (such as a crate, gun, or gunwale), at which point they turn right. If turning right is impossible, they turn left, and if neither is possible, they reverse direction. If one piece runs into any other piece both reverse direction.

The pieces must be loaded in correct order: powder, wad, then shot. The fourth piece, the bucket, is used to clean out a cannon after it has been fired or if a piece has been loaded in the wrong order. Pieces are maneuvered by placing arrows; a piece traveling over an arrow changes to its direction. It is necessary to place an arrow directed to the mouth of the barrel to move the piece into the cannon. A player may have up to three arrows at a time on the board; after adding additional arrows, the oldest one will be removed.

Gunning with the navy

When playing the gunnery puzzle in the navy the guns will be fired after all four cannons are loaded. Pirates must have at least apprentice experience at rigging or sailing, carpentry or patching, and bilging to access the gunning mission.

Many officers in charge are very picky about who gets to gun on their ship. On a sloop, only one person can gun at a time - if that gunner is doing poorly, the offensive capabilities of that ship may be hindered. On larger ships, multiple people can gun at once but a less-experienced gunner can still tie up four cannons that could be filled in less time by more skilled players.

Pirates who wish to gun while jobbing with another crew are advised to ask the executive officer politely. If they are refused, it is advised that they find another open duty station or wait until one becomes available. Having a good gunning puzzle standing is advantageous to such requests; it is suggested that less able pirates practice gunning on navy missions to improve their standing.

Gunning takes time to master and usually requires many hours of practice to excel.

The following trophies are related to gunnery:

Gunnery is most similar to the game ChuChu Rocket!, originally for the Dreamcast, which also has constantly moving pieces which a player guides with a limited number of arrows. Important differences include collision between pieces, the requirement that the pieces enter the goal in a certain order and the lack of a multiplayer mode.