Doubloons are a secondary form of currency in the YPP world. The primary currency is PoE - Pieces of Eight. Doubloons are not used on Subscription Oceans, but players may purchase a subscription for 42 doubloons per month, a practice called coinscribing.

Doubloon Oceans distinguish themselves in that one can play without paying a subscription fee, thus there is no concept of a "limited free trial." By purchasing doubloons, a player ensures that their pirates will never be deleted, should they not login to the game for a while.

Once a doubloon has been used, it is sunk, meaning removed from the game economy. Shoppe owners never receive any part of the delivery cost. Doubloons are only inserted into the game by player purchases using real money and through small prizes in Ocean Master sponsored tournaments. Doubloons can be traded between players by using the doubloon exchange, where players buy or sell their doubloons for PoE. The price of a doubloon on the exchange is set by the players who choose how much they wish to pay in order to buy or sell a doubloon.

Doubloons are held by a player's account itself, rather than by any particular pirate in the account (as is the case for pieces of eight). This means any pirate from the account that received the doubloons (whether by purchase or in-game exchange) can use them, regardless of the ocean. The received doubloons will appear on all doubloon oceans, and for all alternate pirates. Once a doubloon has been spent, it will be also be gone from any other pirates on that account and from all other oceans. Note that the doubloons will not appear on subscriber oceans in that account, as they cannot be used there.

Doubloons can be bought with US Dollars (Or by text message with any other currency), using all manner of payment types via the billing page. Types of payment include credit card, PayPal, mobile phone, prepaid cards (available at listed stores), money order and checks. The cost of a doubloon varies between about $0.25 to $0.20 per doubloon, depending on the volume of doubloons purchased.

After payment is received, doubloons will be credited to the appropriate account. Depending on the payment method this may be automatic (in the case of credit card, PayPal, and redeemable codes), or may have to be done manually (in the case of money order and check payments).

Payments using a credit card and Paypal can be made using the in-game "Get Doubloons" interface (in addition to the billing page), which can be reached from the doubloon exchange, or any cashbox. Doubloons are credited to accounts automatically, and should be received in a matter of minutes.

Players who don't have a credit card can purchase Visa or MasterCard gift cards in US retail stores and use those to make purchases through the usual credit card payment method.

Payments made using money order and check must be have to be manually added to accounts and are done as soon as possible after the payment is received. This could take up to a few working days.

All other payment types can be made through the billing page. As of August 2016, pirates can also purchase doubloons via Paymentwall methods (which includes bank transfer, ewallets, some mobile phone payment services, and PaySafeCards) and through the Steam system.

Doubloons will be credited to the account once payment is received. 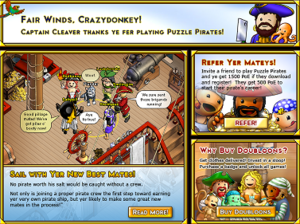 Doubloons (or subscriptions) are not the only reward given to players for supporting Three Rings. First time purchases will ensure that the pirates on the purchaser's account will never be deleted for inactivity after approximately 6 weeks of not logging in. In addition to this, players will no longer see the 'Thanks for playing!' screen when they exit the client. Depending on the amount of doubloons purchased, players may also receive Rogue Marks and a reward.

Doubloons are used in "delivery costs", a set fee of doubloons required to pick up items once they are ready in a shoppe. These doubloons are sunk, they do not go to the shoppe or stall. Doubloons are also required to purchase items in the palace shoppe, including badges, which enable users to do tasks required by the rank that they have in their crew. Other doubloon costs include a fee to set up a crew or shoppe.

The delivery cost article is an index of those purchasable items and services which require a doubloon fee to be paid.

The doubloon market can react to events in game. For example, when ships were sold for discounted doubloon prices Sage Ocean saw a rise from 1600 PoE per Doubloon to over 2100 within a few hours.

Players are also able to trade doubloons via the standard trading window or give doubloons to another pirate via the /tip command. There is a 2% fee when selling doubloons. (requires confirmation)