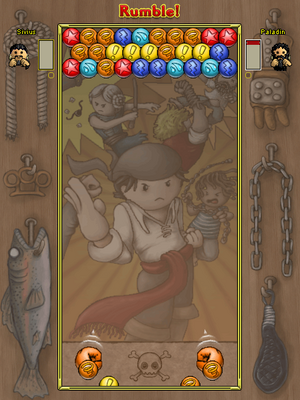 Rumble is a multiplayer puzzle. It is available from the tournament board or as a parlor game. Players can challenge NPPs or other players to a rumble and utilize bludgeons to defeat them. In addition, the final phase of a sea battle against Barbarians is a rumble.

Rumble is free to play three days a week. Rumbling at sea and via a player challenge is always free.

Meant as a concept of martial arts, fisticuffs and/or melee fighting, the gameplay of Rumble is similar to Snood, Bust-A-Move/Puzzle Bobble, or PopCap's Dynomite. The player must fire colored balls in clusters of at least 3 balls of the same color to send attacks to the opponent.

Two launchers, one for each fist, lie at the bottom of the field. By default, moving the mouse point aims the launchers. Once aimed, Z or the left mouse button fires the left launcher, and X or the right mouse button fires the right. When fired, balls move in a straight line, reflecting off the walls, until they come in contact with the mass of balls at the top of the field. If a ball stops such that it touches a cluster of at least two balls of the same color (that is, it makes a cluster of at least three when it stops), all balls in that cluster drop; any balls that are left unsupported from the top fall with the original cluster when this happens.

Any ball may be charged before launching by holding the fire button for about a second before firing. The ball must land on a matching cluster (and be otherwise able to break that cluster) to stay charged; otherwise, it will lose its charge and be treated as a normal ball. If a charged ball hits a cluster, it will keep its charge, but not break the cluster.

If you drop a charged group by breaking a group above it (leaving the charged group unsupported), then the dropped group will float in mid-air until the end of the combo. Therefore, these dropped charged groups can still be part of that combo.

Charged group clears and combos are the functional equivalent of swordfight strikes. They are the most powerful, their impact on the opponent is also represented by the top of a weapon's drop pattern, and they come from the upper corners of the screen.

Bruises appear as dark grayish balls, and are similar to the attacks in Swordfighting, as they are not immediately accessible for use. Clearing any cluster adjacent to a bruise clears it up; two clears are necessary to make a ball usable. Bruises may also be isolated and dropped from the puzzle like any other ball.

Bruises occur for several different reasons. Strikes, coming in from the upper corners, push the rest of the balls out of the way to make room for themselves. This may separate a charged ball from the cluster it was part of. If this happens, the charged ball becomes bruised.

Bruises will appear in the strike itself for two reasons: if there are bruises in the bludgeon's attack pattern, and if balls that are not part of any charged group are dropped when the combo is set off. In the latter case, each non-charged-group ball that falls adds a single bruise to the strike created by that combo.

Finally, a new row of balls is introduced into the playfield every eight fired balls. Furthermore, you can delay firing a ball for at most five seconds before the game fires one for you automatically (making stalling more problematic for Rumble than for Swordfighting).

As the game progresses, the probability of some of these new balls being bruised increases. All players receive the same new balls, but faster players will naturally encounter them sooner than slower players.

During a group Rumble, when there are multiple pirates on the same side, a player can defend a teammate. Clicking on your teammate's image places a blue bar at the top of their mini-game display. The stronger your strikes are the wider the blue bar becomes. It is your defense capability. A small bar means you are defending a little, a large bar means you are defending a lot.

When this is done, the 'defending' teammate's target circle disappears from the opposing side, and they are no longer attacking the opponents. The defender will take some of the strikes and sprinkles that would have been incurred by the defended teammate.

The main trick to successfully launching a combo is to save the ball that is the same color as the first group you created in one fist, while building with the other fist. For example, you might create a red charged group on the left hand side of the board. You continue to create charged groups (while leaving a clear path to that first group), until one of your fists has a red ball. You then continue to build charged groups with the other fist, until you decide to launch the combo. Of course, it's often a good idea to set off your combo if you are just about to be attacked, since the attack will often weaken or deny access to your combo. Having saved a ball of the right color, you are able to set off the combo whenever you need to.

It is generally useful to create charged groups at the start of the combo that cover the entire width of the board. This way you have the largest possible area with which to build your combo, and any sprinkle attacks will add to the size or bruising of your attack, provided you can still access the first charged group. This also prevents the danger of thinking a combo will clear your entire board, when in fact it may leave a large dangerous spike formation.

Since every ball dropped in a combo that is not part of a charged group becomes a bruise, it is very useful to incorporate these into your combo to make the strike that much harder to break down. If you build a combo you judge to be sufficiently large, you can take a few seconds to add a few random balls that hang off it. You can also avoid charging the groups that arrive in the form of sprinkle attacks, and against a regularly sprinkling opponent this is a particularly useful tactic.

In a one-on-one match, you can of course observe the color pattern of your opponent's sprinkles. If you make sure that the first charged group is a certain color and in the appropriate position, incoming sprinkles will only add to that group and can never block access to it. This is less useful in a brawl, where you may be subject to many different attack patterns. 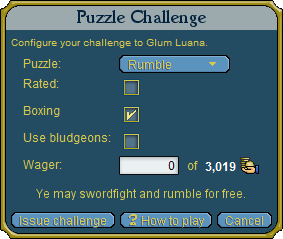 The update of Feb 5th, 2008 brought a new type of the game, called boxing. It is an option available to choose when challenging another player or a NPP. It is a one-handed game of rumble with same possibilities and sizes, but a slightly changed background. All of the mechanics are still the same as in the normal rumble game and there still is an option to use bludgeons.

The following trophies are related to rumbling: